A Look Back on the Ten Y Fan Challenge 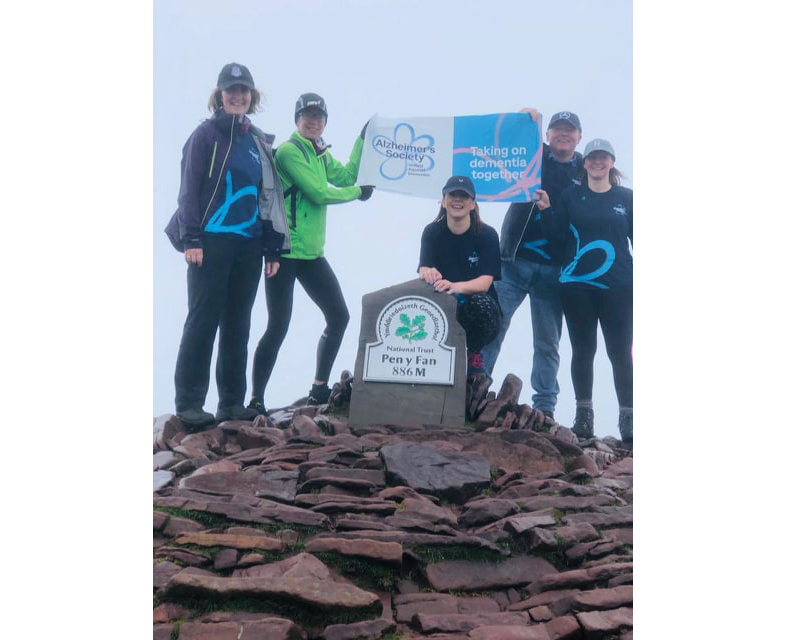 For the last 5 years McCartneys - the Estate & Land Agents, Surveyors, Auctioneers and Valuers, have an annual charity of the year. This year they’re raising money for The Alzheimer’s Society UK. It was decided that they should take on an epic challenge, and Pen y Fan was in their sights. 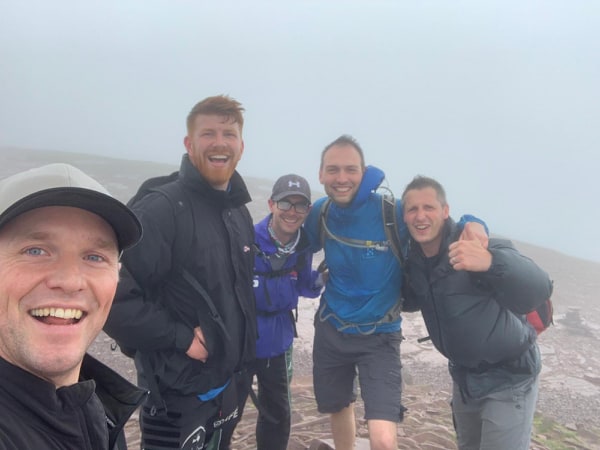 Pen y Fan is the highest peak in South Wales. At 886 metres above sea-level, it’s the tallest peak in the Brecon Beacons, You would think this would be a challenge enough, however it was decided that climbing it 10 times, making it the equivalent of scaling Everest would be a better idea. Furthermore this should be completed in 24 hours.​​​​​​​

The team was made up of small groups, plus 5 climbers taking on the individual challenge – Jake Best, Tom Carter, Jamie Tulloch, Dominic Sumner and Lewis Price. Not forgetting DC the dog. The finger of blame for this idea has been firmly pointed at Jake, who says, “A friend of mine had mentioned the challenge and I thought it sounded like great fun. With everyone that was taking part there were various levels of fitness, ages and medical conditions, so it was a real test.”​​​​​​​

The team from Kidderminster were the first to start their group ascent on the Friday morning and sent back videos of themselves, windswept, wet and battling the elements as a warning to the others to be prepared. They’d started the count.

After work on Friday, the individual climbers, arrived at the foot of Pen Y Fan. Lewis sums up how the team felt, “I was really nervous and didn’t know what to expect. I wasn’t sure if I was mentally or physically prepared for the challenge. It was exciting though, once I met up with the other guys and realised that they felt the same as me, we were all in the same boat and were going to tackle it together.”

Fuelled by determination and the thoughts of raising money for such a good cause, the first steps were taken, however their hopes of achieving over half way that night were halted with the most horrendous weather. There was a forecast of imminent thunderstorms and the rain was horizontal. After the 4th descent with visibility reduced to just a few steps in front, it was decided to try and grab some sleep in their cars and tackle it in the morning. Dominic describes the night as “very cold, cramped, aching limbs, blisters, pounding rain and the knowledge that there was so much work to do the next day. We all got very little sleep.”

Saturday morning saw the guys put on wet clothing and heads down they began again. Tom describes the worst moment, “ascent number 6 was horrific for me, every landmark on the way up seemed to just remind me how far we still had to go to reach the summit, I had to have a few stern words with myself at that point.” 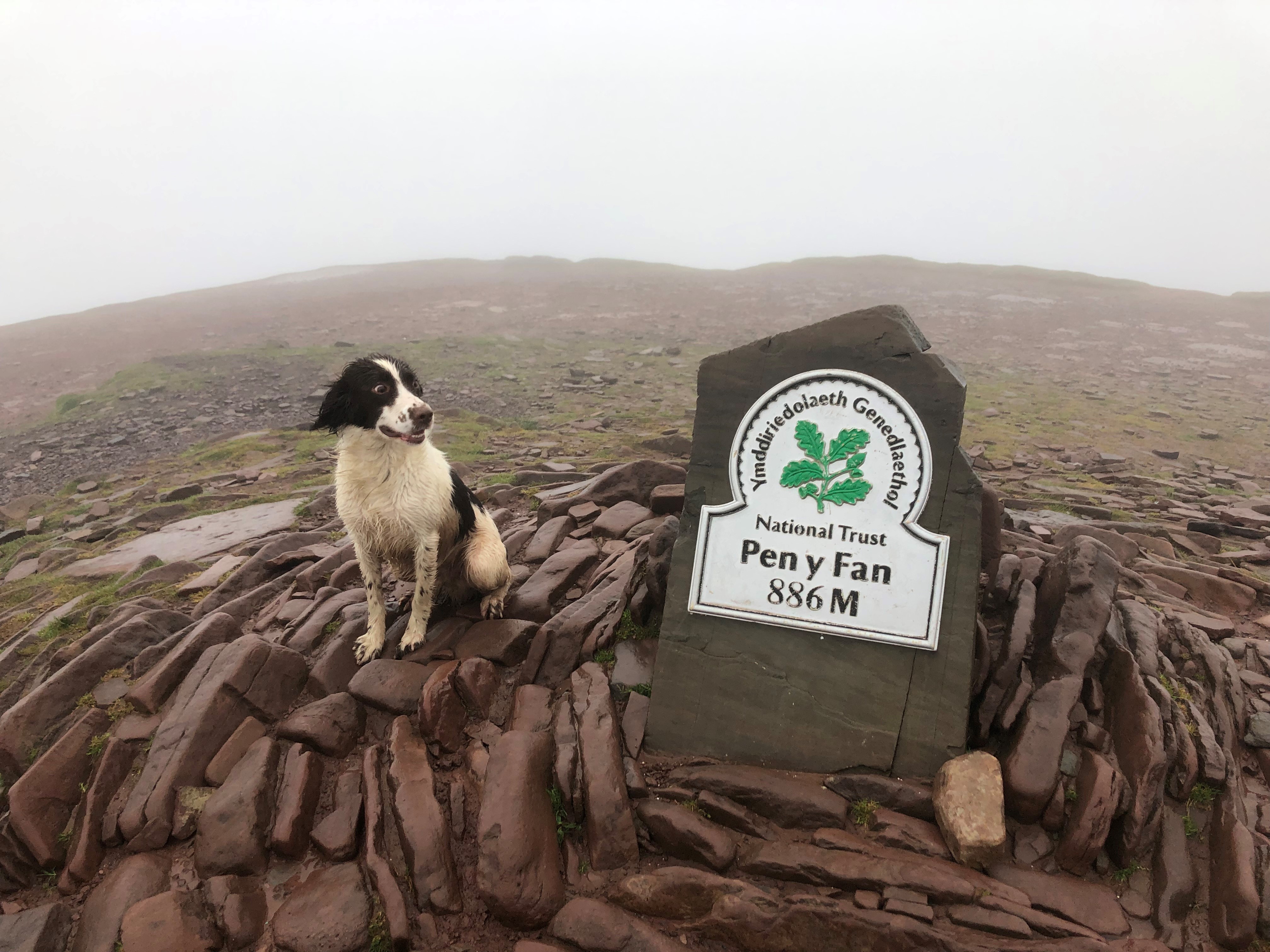 Spirits were raised around 7am when the team from Brecon arrived to do their group ascent. Once they’d finished, Rachel decided to stay behind and accompany the individual climbers to their target.

Later that morning, the final group-ascent team from Knighton arrived, along with Lisa from the Alzheimer’s Society, and as they made their way up, met with the intrepid climbers as they picked their way down during descent 7. Hugs were given all round, jelly babies passed and well deserved words of encouragement and support lavished on the tired, wet and cold group. Jenny Layton-Mills, who was leading the climb up said “I couldn’t have been prouder, they’d obviously had a rough night and the weather was abysmal. They were a real credit.”​​​​​​​

A quick turnaround at the bottom meant that everyone finally met at the peak. Spirits had started to lift and DC the dog received many scratches and fusses, from those that could catch him.

After much emotion and many photographs, the Knighton group said their goodbyes, with Helen now also staying behind to join the lionhearted individual climbers and help them reach their goal.

Finally, descent number 10 was accomplished. Exhaustion and elation was in equal measure, Jamie said “The physical side was obviously draining but it turned out to be one of the toughest mental challenges I have ever done. It was mentally tougher than Ironman Wales which I did in 2015. We were all shattered, well apart from DC the dog. He did 7 climbs in total, plus the extra as he ran across every inch of the mountain. He would have quite happily done more, but Tom made him have a rest and put his paws up.”

Asked why they thought this challenge in particular was suitable for their charity, Tom said, “It was once stated that people first diagnosed with dementia felt they had a mountain to climb—a looming colossal obstacle of unchartered territory. With support and help, that first step doesn’t seem so high. The Alzheimer’s Society UK offers support for all kinds of dementia, it also funds research and actively campaigns for those affected and their families. We wanted to help with this wonderful work, so that no one has to face dementia alone and so we chose to climb that mountain.”

If anyone would like to make a donation to the McCartneys fundraising please visit out Just Giving page.