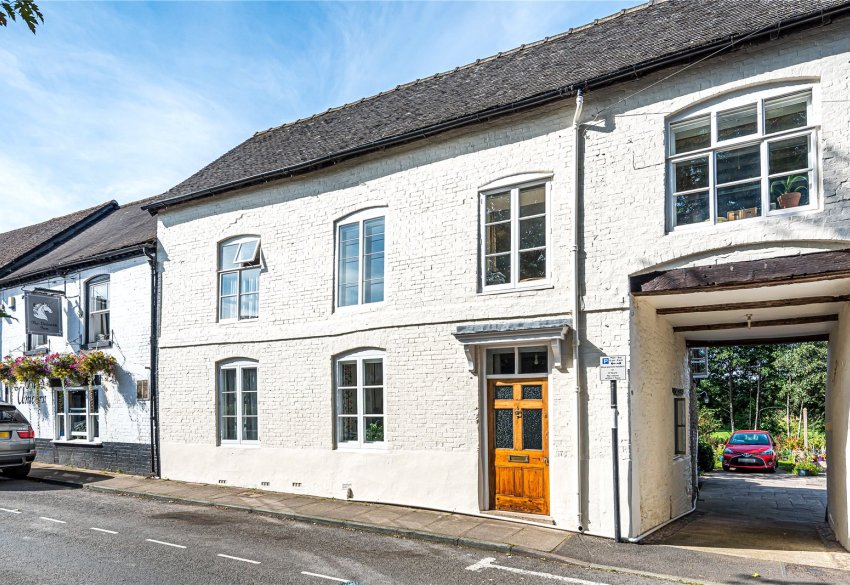 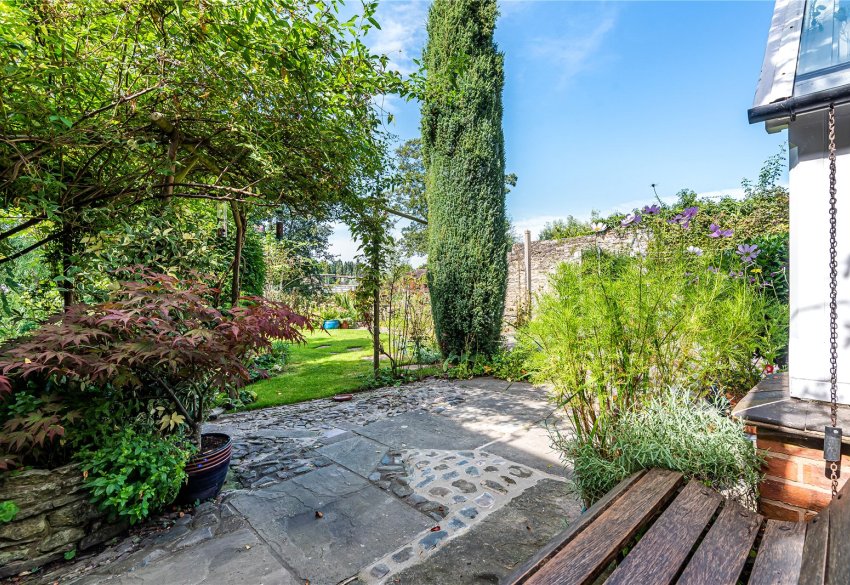 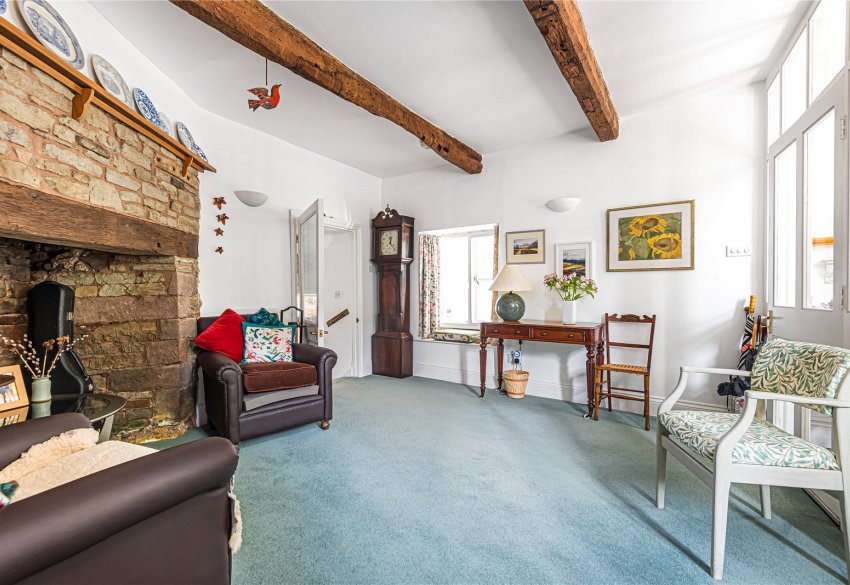 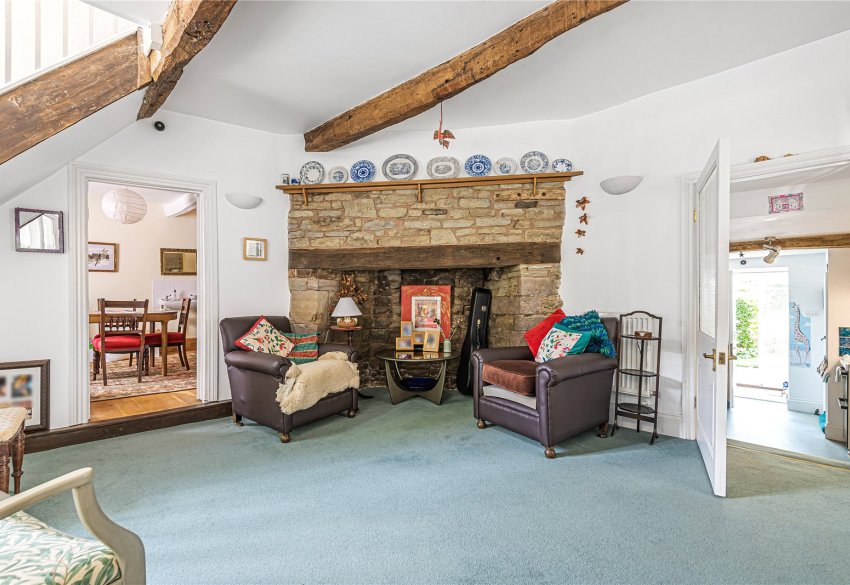 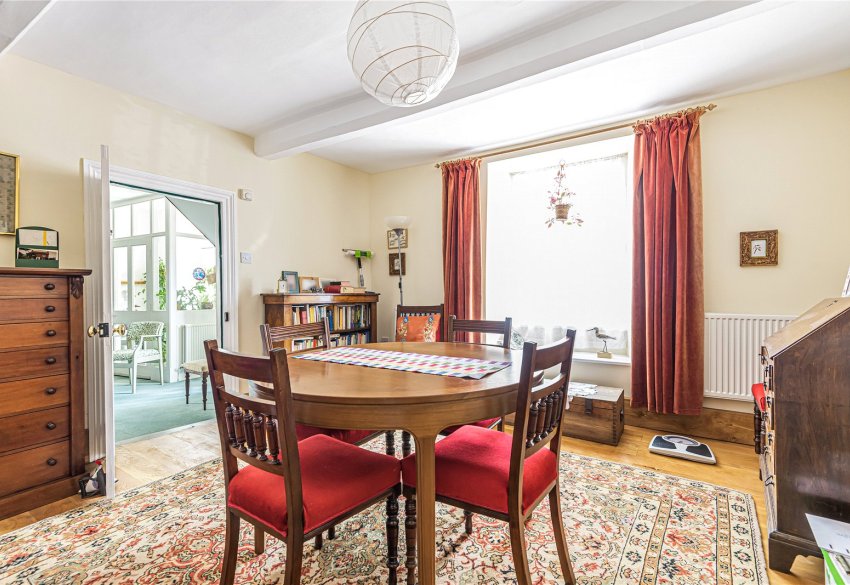 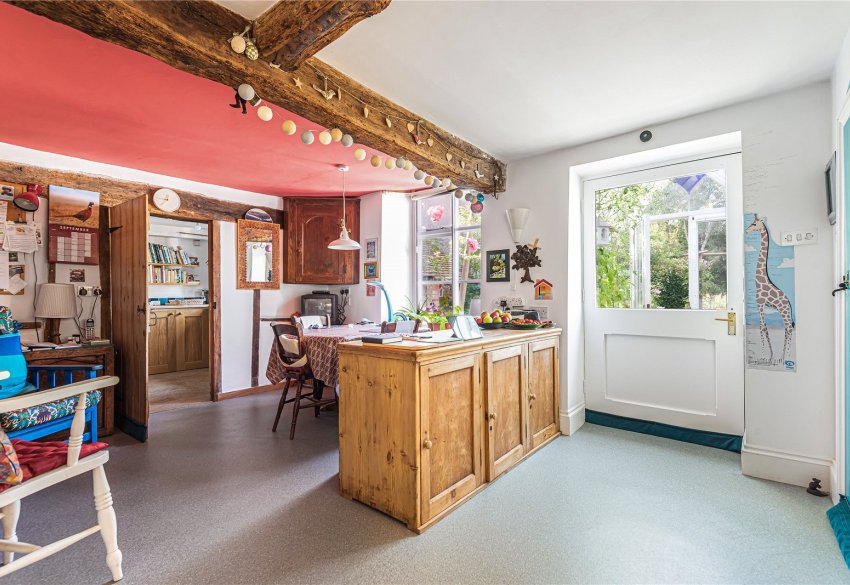 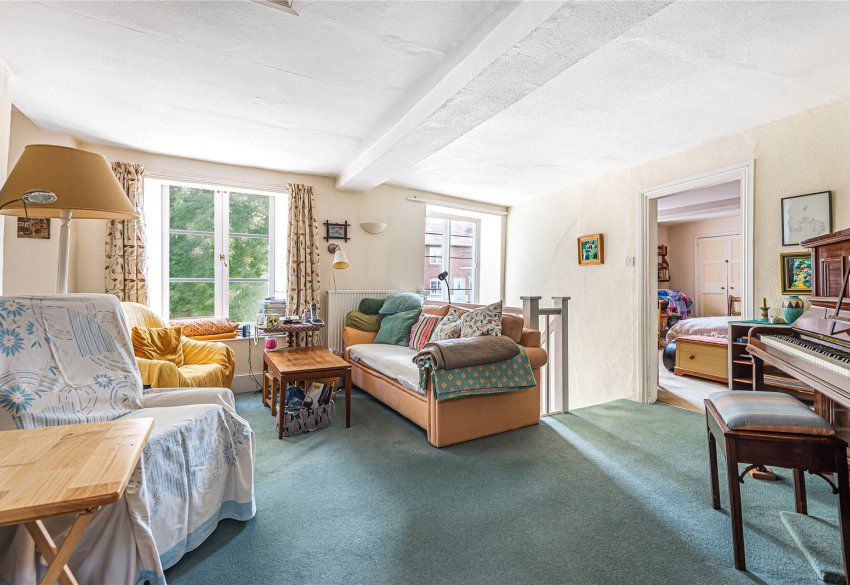 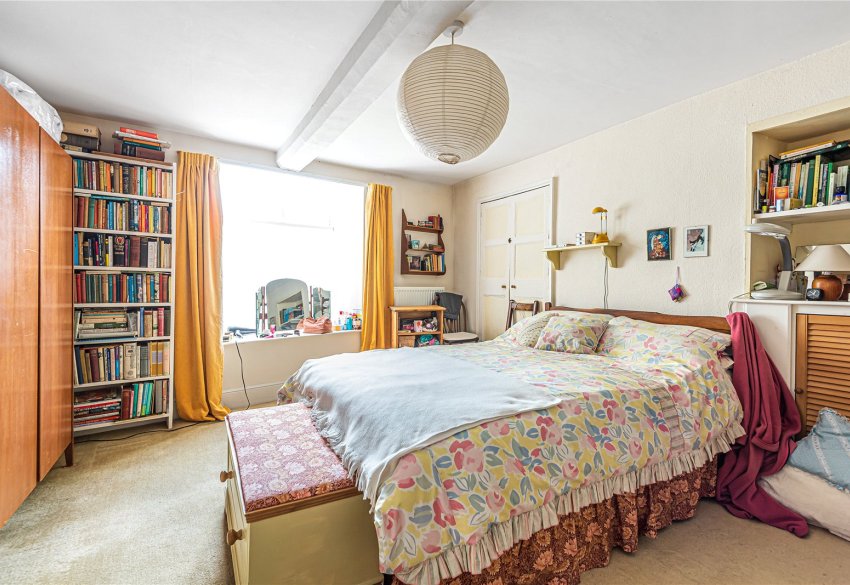 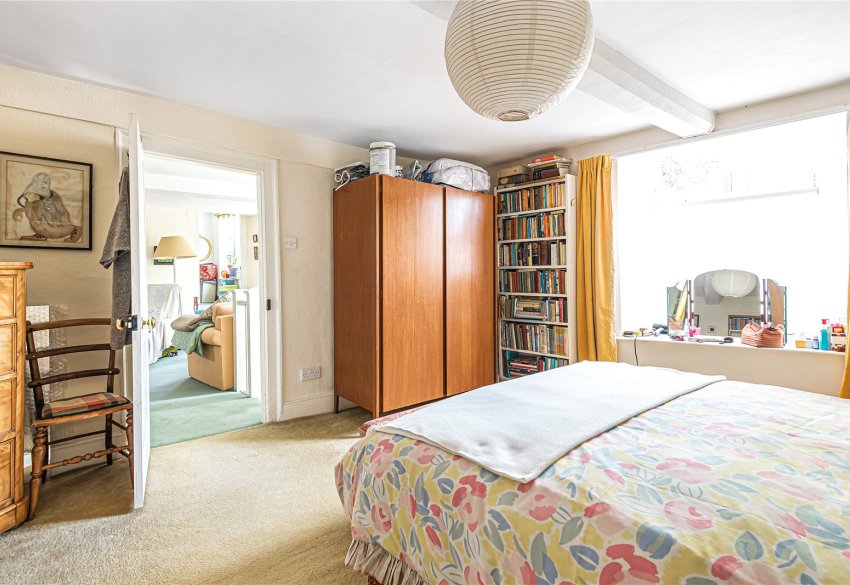 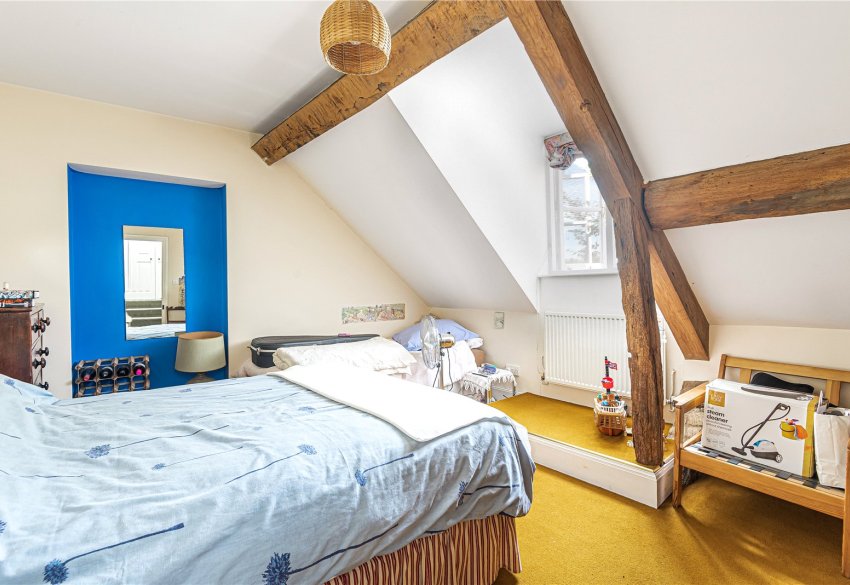 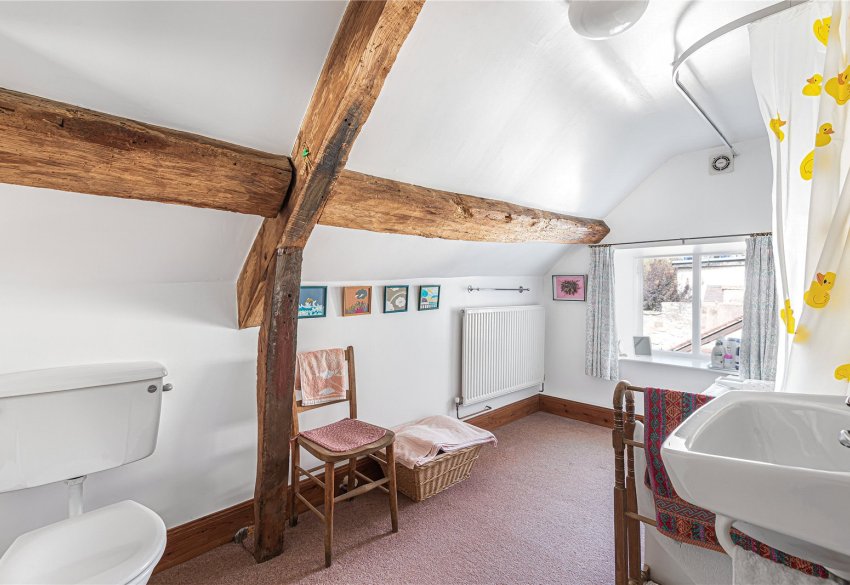 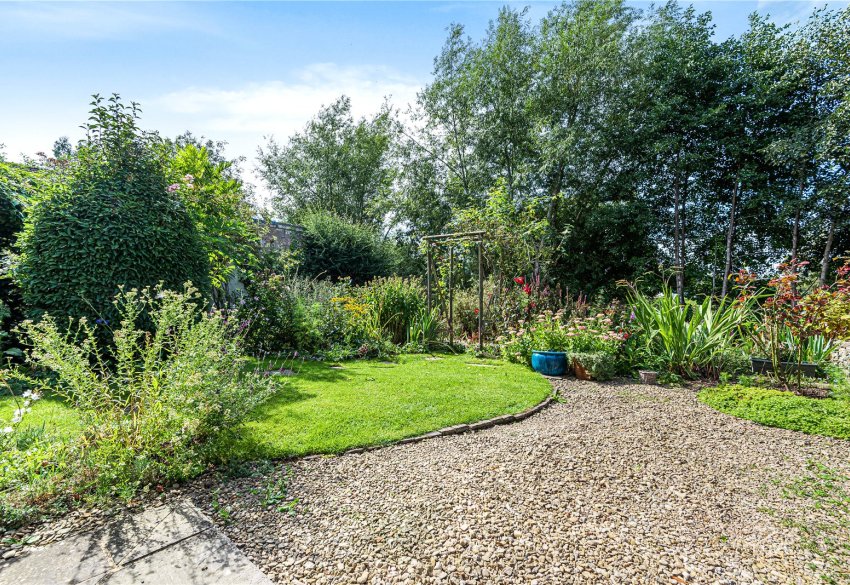 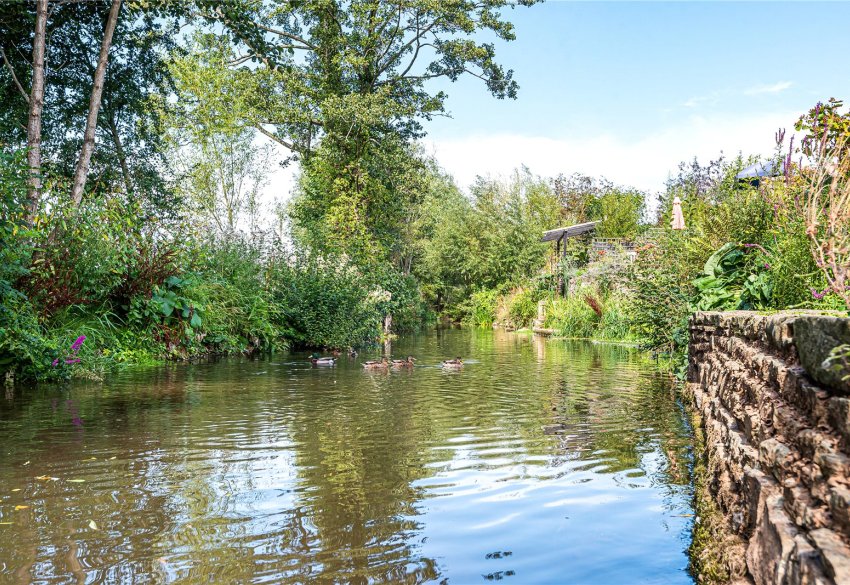 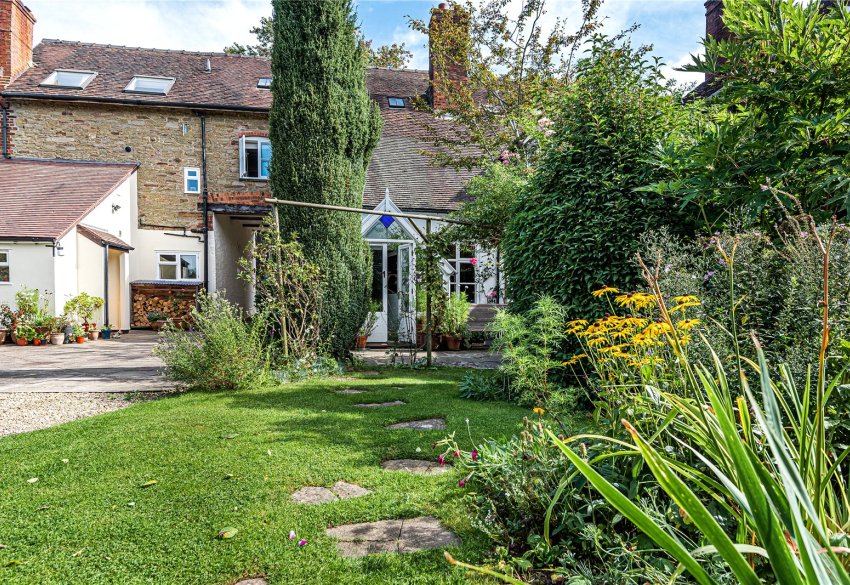 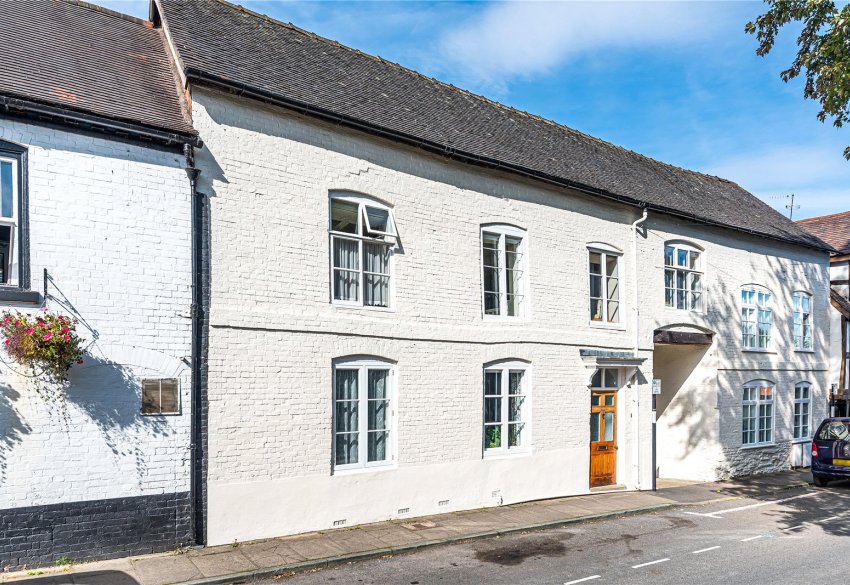 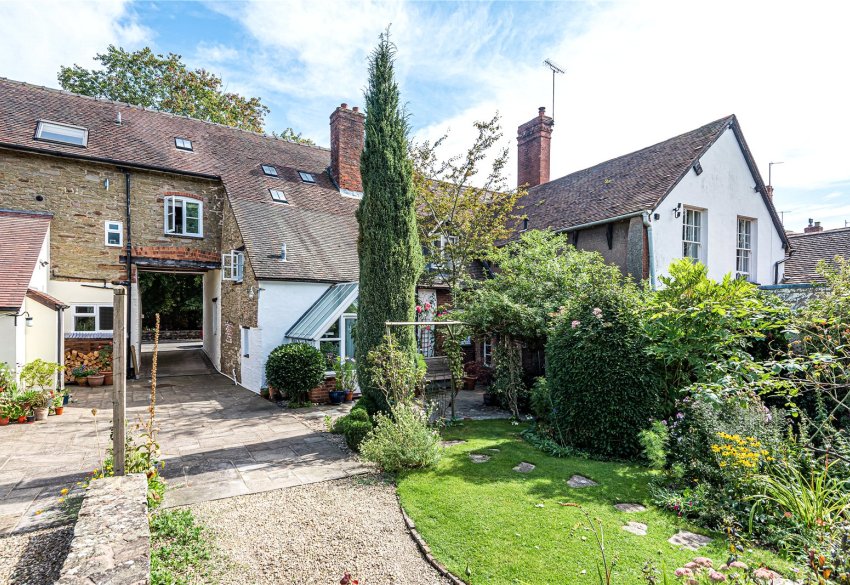 Accommodation
Entering through the glazed front porch, one passes into a spacious hall/reception room with windows to front and side, and featuring an ancient stone inglenook and sturdy oak ceiling beams. There are two doors - one opening to the front dining/sitting room, and the other to the family kitchen at the rear. The dining room, originally used by the present owner as a medical consulting room, has a small fireplace, a hand washbasin, a window to the front, and an impressive modern French oak floor.

..
Down three steps from the reception room is the large family kitchen area, which features a range of custom-made cupboards with oak doors, a useful pantry, off, and a double stainless steel sink. A large window and a glazed door to the rear porch offer views of the entrancing garden. The garden is accessed through a bright flagstone-paved conservatory/porch, which can be used as a seating area or as a mini-greenhouse.

..
A door from the kitchen opens to the utility room, which has a fully-tiled floor, a large stainless steel sink, and a range of built-in cupboards. There is a Worcester central heating boiler, plumbing for a dishwasher and washing machine, and a separate w.c. with washbasin. Steps lead down to the mediaeval cobblestone-floored cellar.

First Floor
A staircase from the front reception room opens on to a generously-sized first floor room, currently used as a music/sitting room; it has two large windows overlooking the street, and doors to: The master bedroom, with built-in cupboards and window on to the street. A brightly-lit second bedroom/office, with a large window to the front and a rear window which gives a fine view of the garden, the river, the meadow and the woodland beyond. A door opens on to a half-landing with built-in airing cupboard and further storage; there are stairs down to the fully appointed family bathroom with bath, electric shower over, and wc, and a substantial third bedroom under the eaves with a dormer window overlooking the garden.

Lofts
Lofts- Accessible from the upstairs lounge is a large floorboarded loft space, running the length of the property, with Velux traditional windows to the rear aspect. Historically there was a 2nd storey, but the connecting staircase was removed( although a portion of it is up in the attic still) and access is now through a trap and ladder to one attic room which is plastered, and 2 further potential rooms subject to planning consent.

..
Most windows have Everest secondary double-glazing, there is gas central heating throughout, and the property has been kept in excellent condition by the current owner.

Outside
Outside is a lovely garden, which has been featured among the "hidden gardens of Ludlow." It has been lovingly created and tended by the present occupant and has a lawn, a range of mature shrubs, trees, colourful flowering borders, and a useful courtyard area. There is a sturdy garden storeroom of brick and stone construction, with a tiled roof. Pathways lead to the steep bank above the River Corve, from which stone steps run down to a secluded quay. Here one can enjoy observing the busy life of the river through the seasons - including ducklings, dragonflies, trout, and even a glimpse of otters! The property includes fishing rights for the river frontage.

..
Of particular value is the off-road parking space, approached through the historic archway to the right of the house.

Agents Note
The property has been affected by flooding twice since 1951, in 2007, (when neglected local river management, which was subsequently remedied, was a significant factor) and for one night in 2020, when three successive storms with barely a break culminated in Storm Denis. However, only the garden and the two rear ground floor rooms of the property were affected, while the effects were mitigated by measures already adopted by the owner, which include a "Mission" exterior non-return drainage valve, two expandable floodgates, non-return valves to the downstairs sinks, and a sump and automatic pump in the cellar

Agents Note
On a wider scale, remedial measures are being implemented through the "Slow the Flow" scheme for the River Corve upstream of Ludlow. Shropshire Council, Shropshire Wildlife Trust, and the Environment Agency, in partnership with local farmers and landowners, are re-introducing features such as meanders, overflow areas, natural obstructions, and "leaky dams" to reduce the volume and speed of storm run-off in the river catchment area. As a result, it is expected that the threat of flooding on the Ludlow Corve will be significantly diminished. 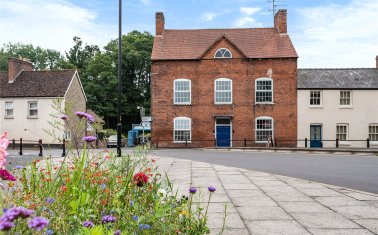