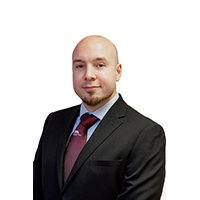 Andrew joined McCartneys LLP in November 2021, as part of the Survey Team and undertakes a variety of professional work, including Valuation, Commercial Estate Agency, Lease Advisory and Commercial Property Management.

Originally from Wigan, Andrew relocated with his family to Shropshire in the late-1990s and has recently returned to the area after living in North East Lincolnshire for the last 10 years. He has a RICS Accredited Degree in Property Development from Sheffield Hallam University, qualifying as both a Member of the Royal Institution of Chartered Surveyors (MRICS) and Registered Valuer in July 2021.

In his spare time, Andrew enjoys watching live music and sport, being a keen, but increasingly passive, sportsman, with a fondness for football, basketball and rugby league. He is a particularly sociable person and is often found socialising with friends, cold beer in hand, particularly when assisting the ‘Pit Master’ as part of the Smokin’ Salop BBQ team.