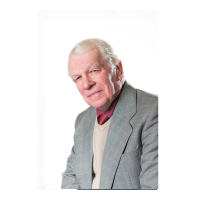 John Uffold was the Chairman of McCartneys and partner in charge of Ludlow Livestock Market, having joined the partnership some thirty six years ago, previously working in private practice in the West Country and East Midlands and, for a time, as a senior surveyor for the Land Service (formerly part of the then Ministry of Agriculture Fisheries and Food – at the time John was the youngest senior surveyor appointed by the Ministry since the war). He is now a consultant with the business carrying out professional work and still selling the fat bulls at Ludlow Market each Monday.

Graduating from Reading University with a Bachelor of Science Honours Degree in Estate Management and being the last winner of The Estates Gazette Cup for the student of the year, John is a member of The Royal Institute of Chartered Surveyors and a Fellow of the Central Association of Agricultural Valuers, a fellow of the livestock auctioneers association and member of the national association of Valuers and auctioneers. (John won the Society of Valuers and Auctioneers National Competition for young auctioneer of the year more years ago now than he cares to remember).
Whether a Lord or a smallholder, John treats everybody the same and has acted for both in his time at Ludlow, firmly believing it is the job of professional men to help the vulnerable in society and not just those that can pay a good fee.

John is married to Mary, who is his secretary at McCartneys, and has two children, Oliver 23 and Ruth 27. He is a member of a small family farming partnership breeding Pedigree Texel Sheep.

Formerly a keen young farmer himself, winning a Gold Medal at Smithfield for beef cattle and carcass judging, John also representing England at the European Rally for Tractor driving and fencing.
John has been associated with the Y.F.C. since moving to Shropshire and was instrumental in McCartneys apprenticeship scheme aimed at bringing young people into the firm and giving them professional training, a career and a job for life. An outdated concept to some but not to McCartneys.

Traditional values and principles, coupled with modern efficient service and keeping the business in its widest sense relevant to the world in which we live, have been and still are John’s core principles.

As Chairman he has been involved in disputes concerning umpires, arbitrations, court cases and is known in the locality as being able to broker a deal between parties even where they are, to start with, intransigent and emotionally involved. The ability to see both sides of the argument in a pragmatic, rational and businesslike manner is the key to his success. This is particularly important when dealing with divorce cases and partnership disputes.