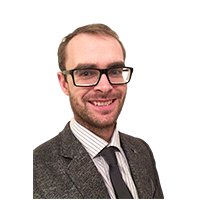 Lewis is a graduate of the Swansea University with a bachelor’s degree with honours in Mechanical Engineering.  Lewis began his career at Silverwing Ltd, a non-destructive testing company, designing and developing testing equipment.  In September 2015, Lewis moved back to his home in Mid Wales and joined McCartneys LLP as a trainee Building Surveyor.  Since joining the firm, Lewis has qualified as a Domestic Energy Assessor to undertake EPCs.  Lewis is involved in a range of surveying work including architectural design & drawing work, Planning Matters, Building Regulations and Land Surveys on residential, commercial and agricultural sectors mainly from the Kington office as well as other McCartneys offices in the south Powys region.

Lewis comes from a family farm near Erwood.  He is regularly up the farm helping out in evenings and on weekends and takes a keen interest in the running of the farm.  In his spare time, he is an active member of Llandefalle Young Farmers particularly enjoying competing at the drama festival, public speaking and sports day.  He has also been a member of Hay-on-Wye Cricket Club since he was 18, mainly playing as a batsman in the team.