Tickets Please!! Take a Seat and Relax as We Whisk You to Bucknell Railway Station, and Tell You the Story of How It Became the Family Home It Is Today. 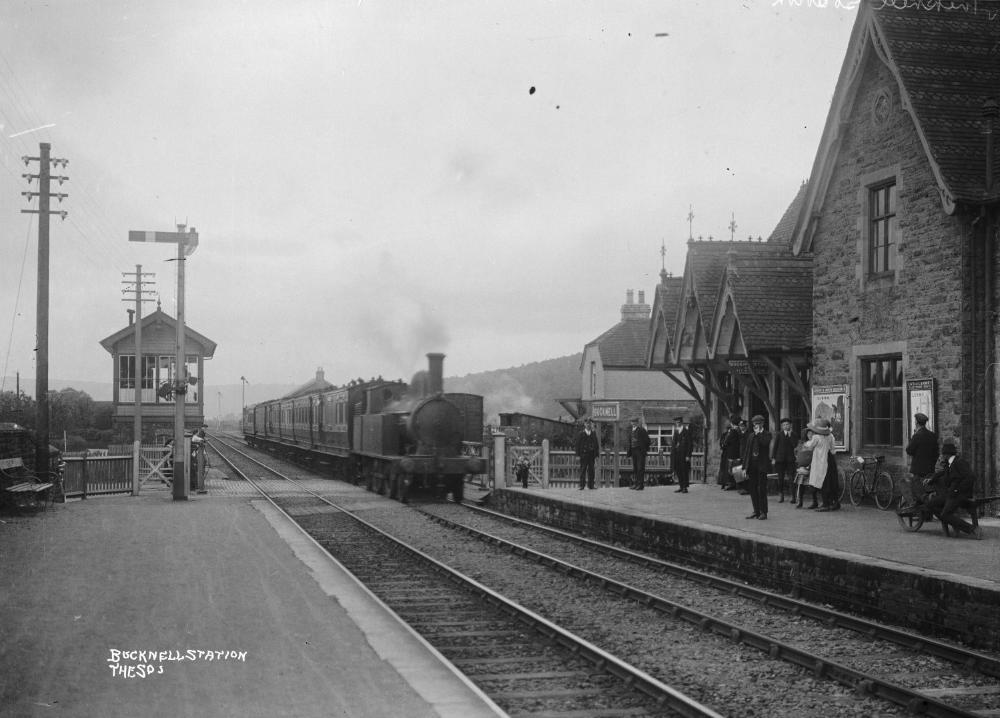 At the end of 2017 we received a call from Austin Powell, who wished McCartneys to act as agents, to sell Bucknell Railway Station. The bricks and mortar of all our homes always hold stories, and Station House is no exception.

The station and line was constructed by the Knighton Railway Company when they built the Craven Arms to Knighton line in 1860, engineered by Henry Robertson. Further construction and route openings in 1865 and 1868 subsequently put the station on a through route between Shrewsbury and Swansea.

The building itself is extremely impressive, with rock-faced limestone, ornamental cresting, elaborately cusped bargeboards and octagonal ceramic chimney pots. So as not to be left in any doubt when it sprang into life, a date stone was proudly placed stating “1860" in the apex.

Bucknell station quickly became the rail outlet for a wide area, stimulating a growth in the village itself. It was a busy and important station, and looking at the building itself, it’s as if it’s fully aware of how important it actually was.

In the Autumn of 1957, Austin’s Father, Mr Terry Powell, was appointed Station Master at Bucknell, with responsibility for the Stations at Hopton Heath and Broome. With the job came the beautiful house and garden at Bucknell Station.

Apart from passengers, a great amount of wood and sawdust went by rail from B & J Davies timber yard. Following Mr Powell’s appointment, it was the base for the coal business of the area with The Radnorshire Company. Distribution of the Radnorshire Company’s seasonal sugar beet trade for the area also moved to Bucknell at that time.

The line was active 24 hours a day, 6 days a week, with no trains on Sundays.

The first passenger train each day arrived at about 0430hrs and brought the mail, which was then collected by the postmen and women, and the newspapers, which were sold and distributed around several villages by Mr. Bill Shaw. Mr Shaw’s shop was right opposite the station and the green wooden building is still there today.

Austin recalls happy memories of growing up there. “Being the Station Master's son meant the railway was my 'playground,’ every day in the school holidays, when the daily Goods train arrived to drop off trucks and vans and pick up empties I'd 'help' the porters and shunting men, and occasionally got a ride on the foot plate of the engine as it went about its work. The guard on the train, a local man called Jack Summers, who lived in Craven Arms, would let me ride in the guards van up to Knighton on many an occasion - all quite illegal of course and if he'd been spotted doing so would probably have got the sack.

A gang of us kids in Bucknell, (2 of which still live in the village) would play in the goods yard and occasionally be allowed in the signal box – again a sackable offence if the signalman had been reported.

Of course just watching the various trains go by was always interesting. There were so many in the late 50s and early 60s. There were trains going to York, coming from Burton on Trent and goodness knows where else amongst the ones that were regulars from Shrewsbury to Swansea and vice versa.

My journey to Presteigne Grammar School started with a train trip from Bucknell to Knighton each day and then a walk up to the car park behind the Norton (Knighton) Hotel to catch the bus. I was one of two kids that did that – it was a magical time”.

When Dr. Beeching closed down many lines, the Central Wales Line (as it was then called), escaped closure, but was downgraded to a line with just un-manned halts. Mr Powell was then moved around with jobs, firstly in Ludlow, and then Hereford, before he later took early retirement.

Sometime after that, around 1967, British Rail decided to sell-off many railway properties along the line, and as sitting-tenants, Mr & Mrs Powell were given first option to buy, which they did, and who could blame them?

In the 1980s, they converted the Booking Office, General Waiting Room and Ladies Waiting Room into what they called "Station House Cottage" and rented it out. They spent many happy years there enjoying the beautiful outlook across the lawns and flower beds.

Time passed and 10 or 11 years ago, with Mr & Mrs Powell now in their nineties, Austin and his partner Sue, moved to Bucknell to look after them, and renovated both properties. They moved into Station House while Mr & Mrs Powell moved into the Cottage. As the now slow trains went by, so did the years and sadly, Mrs Powell passed away in June 2012, aged 98 and Mr Powell in September 2016 aged 97.

Of course, life at times like this becomes very complicated, emotions are mixed with practicalities and decisions have to be made. After the dust had settled, Austin and Sue felt it was time to move away and contacted their local McCartneys Office in Knighton. Having dealt with McCartneys previously, and appointing them to carry out the probate valuation, it was felt they would appreciate the uniqueness of the property, fully understand the situation and knew them to go above and beyond with their service.

At the beginning of 2018, the first people were shown around Station House and Cottage. It was always a pleasure for the Sales Team to carry out viewings, as the magical era, when this beautiful property was in its prime, was still evident and nothing had been lost from its grandness when that first date stone was laid.

Many people fell in love with its charm, some were unable to proceed, others wanted to purchase the House without the Cottage and vice versa. The house stood tall and waited patiently for the right people to walk through the door.

As with most sales, there were twists and turns along the way, which as an agent we aim to smooth out, taking as much of the stress  as possible out of what can be a stressful time.

In March 2018, the house found it’s family, who in the Summer, happily picked up the keys to a fabulous new home and their new adventure.

The Knighton Office at McCartneys received the following feedback from Austin shortly after.

“The team have been a revelation, at all times they have done everything, and more, that they were asked. On at least two occasions they ‘saved the sale’ by ensuring that complications were overcome. They consistently kept me informed, advised me on various issues and were always ahead of the game”.

It was an absolute pleasure to work with Austin, and to be involved with the sale of this wonderful home to its new family. We look forward to their story of ‘buying a Railway Station’.