Leaders of the field, McCartneys with Phipps & Pritchard shine at their Annual award ceremony. 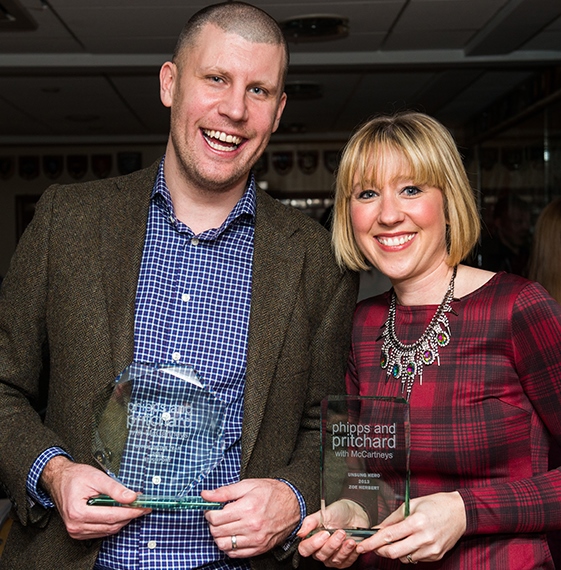 The evening was a resounding success. The highlights and accolades are listed below:

The Stourport on Severn Office of Phipps & Pritchard with McCartneys was awarded the coveted title Office of The Year 2013 and Partner in charge Nick Millinchip (pictured above along with Unsung Hero Zoe Herbert) comments "Myself and staff are extremely proud to receive such an important accolade from our fellow colleagues and we shall strive to further build on our successes as we move forward into 2014. The housing market is still far from easy but people are our strength both in terms of my exceptional support staff and of course our valued clients' who in turn see value in us through great service together with expert knowledge."

The recipient of the Negotiator of the Year was awarded to Rachel Gittoes of the Brecon Office. Rachel has worked tirelessly balancing two roles through 2013 to ensure the smooth running of Brecon Office. Manager of the Office Darren Thomas said “we are delighted that Rachel’s hard work this year has been rewarded, she is an outstanding member of staff”

Unsung Hero recipient was Zoe Herbert, for the development of the PR through Phipps & Pritchard with McCartneys. Public Relations is a powerful marketing tool. It is estimated that positive editorial coverage can be worth ten times the value of equivalent advertising space and Zoe has successfully secured publicity throughout the regional and national press. Under the Fine & Country umbrella Zoe worked alongside Tom Carter to become one of the winning companies of the esteemed UK Property Awards in the 2013 UK regional competition. Competing against a number of Real Estate Agencies in Mid Wales to receive this recognition. Due to this success Fine & Country Homes from McCartneys are now able to display the winners’ logo which is recognised as a symbol of excellence throughout the global industry.

The recipient of the Customer Service Award was Kelly Wear of Portcullis Sale Room. The Livestock Market Award was presented to Nick Baxter who is based at The Ox Pasture, Ludlow.

Special Recognition Award went to Mark Fish and Adam Pearson for their continued commitment in driving forward the IT department putting McCartneys at the cutting edge of technology.

Other awards were Most Promising Newcomer which went to Wendy Mawer, secretary to John Uffold, Chairman of McCartneys, Drover of the year went to Edgar Pryce and two Long Service Awards were presented to George Griffiths and Geoff Price.

McCartneys with Phipps & Pritchard are one of the largest leading Independent estate agents, they strive to offer the highest level of customer service to their clients. With a portfolio as large and diverse as theirs teamwork is essential and this is recognised with their annual award ceremony.

“The workforce is the most important asset of any business.  The annual awards are recognition of all those who go over and beyond the call of duty to achieve their goals and those of the business” said John Uffold Chairman.